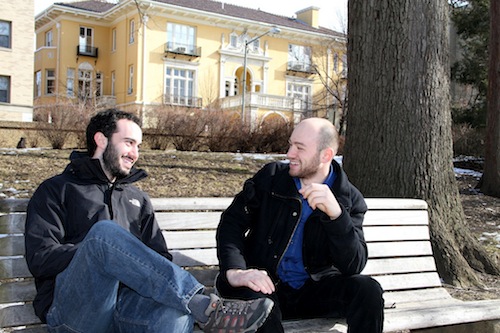 Arts for the sake of the community. That could be the motto of the company, Meridian Hill Pictures, that District brothers Lance and Brandon Kramer have founded. It’s also the spirit in which the company’s film, Community Harvest, which will be screened Sunday in the Our City Film Festival in the District, was made. And it only takes a few minutes of discussion with either to discover why they are so involved in using the arts to benefit others.

“The community fostered creative expression,” says Brandon Kramer, 23, about growing up in Bethesda. “Being Jewish helped push us in the direction of taking art, engaging the community and helping people around us.” They worked on film projects as kids, says his brother, 26, but also learned the value of aiding their community from their parents, who stressed the merits of volunteering, and from the family synagogue, Congregation Beth El of Montgomery County, where the two became bar mitzvah and are still members.

Community Harvest — judged by the festival to be its best short documentary — focuses on a community garden in Northwest Washington, not far from the firm’s offices.

“It was a beautiful place, and the work was inspiring,” says Lance Kramer. “We kept going back, getting to know the people better. Finally, we decided to do a film.” North Columbia Heights Green is home to plots for growing food, a fruit tree orchard, and butterfly, herb and rain gardens. It demonstrates that “energy, vision and elbow grease can transform space and a community,” he says. His brother concurs, saying that he hopes the film will inspire viewers to think about unused land in their own neighborhoods, and how those plots might be transformed to have a positive effect in the community.

After graduation, Lance Kramer, who received his bachelor’s from Dartmouth in 2006, worked as a journalist and on an environmental documentary. His brother, who received his degree from Boston University in 2009, worked as a media teaching artist, traveling to middle schools around the country and facilitating students in producing a documentary about an artist in their community.  Their projects ended about the same time last year; back in the D.C. area, they began to explore ways to work together. After taking part in film projects last summer, they decided to try “a substantive way of collaborating,” Lance Kramer says. Meridian Hill Pictures was born in August.

The company is “a full-service production and media education company,” according to its website (http://www.meridianhillpictures.com), which works with nonprofits, government agencies and “socially motivated businesses” to make documentaries and create educational projects that “inspire, educate and transform communities.”

Although their roles in the company are not rigid, says Lance Kramer, his brother has taken the lead” on the education side of the business while he is more involved in the business end and “on the producer side of things.” “But we talk about everything,” he says.

The Our City Film Festival is presented and run by Yachad (“together” in Hebrew), a nonprofit that helps repair the homes and neighborhoods of low-income D.C. residents. Proceeds from the festival finance Yachad’s programming. The Washington Redskins: Winning Years, directed by Silver Spring’s Walter Gottlieb, also will be shown in the festival.

Community Harvest will be shown in the Our City Film Festival Sunday at The Goethe Institute in the District. The film will be screened as part of the Our Docs Screening Block, 1:15-2:45 p.m. Other blocks are Docs in Progress, Our Feature, Our Narratives and Our Finale. Tickets are $10 for each block. There also is an opening night party at 8 at R.F.D.’s in the District. Tickets are $12. For further information and to buy tickets, go to http://www.yachad-dc.org/Films2011.shtml