The Washington Post takes a look at Ellie Walton, documentary filmmaker and D.C. native, as she turns a wide lens on her city.

By Carla Broyles, originally published on April 26, 2012 in the Washington Post Style section. 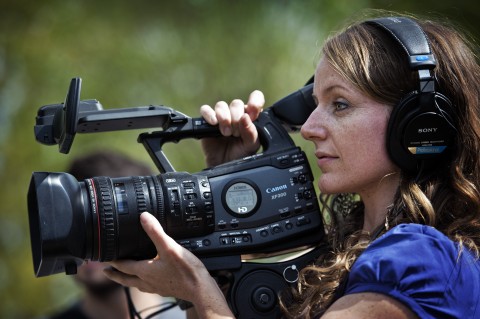 Here at the Riverside Recreation Center in the Deanwood neighborhood of Ward 7, Ricky McNeill, Michael Samuels and Vernon Peterson are primed on documentary filmmaking 101. Ellie Walton and her assistant, Marley Moynahan, want to put the camera in their hands. They’ve assembled the trio for a brainstorming session about how best to approach store owners about job prospects for ward residents.

McNeill, 39, a trainee in the D.C. Green Corps job program, thinks he knows what he’ll find when he tours businesses along Division Avenue NE and asks whether they employ or plan to fill openings with Deanwood residents.

The likelihood that the owners of neighborhood businesses live in the community “is very minute,” McNeill says. “They’re living in Virginia and other places.”

Walton acknowledges McNeill’s concerns. “Maybe that’s something that would be good to bring up in the piece,” she says. But she cautions him not to assume that all liquor and convenience store owners are outsiders or, if they are, that they wouldn’t hire people from the neighborhood.

That commitment to her home city has won Walton acclaim, and last year the Mayor’s Arts Award for outstanding emerging artist, which is presented by the D.C. Commission on the Arts and Humanities.

“Ellie has in­cred­ibly strong community ties. She’s a great film documentarian with exceptional skills in telling stories that are true, real and touching,” says Moshe Adams, director of grants and legislative affairs at the commission. “And she’s able to teach and allow others to explore their creativity. She’s tied to the people.”

Her documentaries “Chocolate City” and “Igual Que Tu (Same As You)” put a human face on the polarizing issues of gentrification and immigration in the nation’s capital. They also are used as teaching tools at area universities. Her recent project “Fly by Light,” which debuts Thursday at the Josephine Butler Parks Center in Mount Pleasant, chronicles the eight-day journey of 15 D.C. teens as they confront issues they face growing up in the city.

Walton is a full-time filmmaker with Meridian Hill Pictures in Mount Pleasant, working on a documentary about the effect of the federal stimulus bill on the D.C. Green Corps and job creation in local neighborhoods.

The studio reached out to Walton, 30, after hearing about her work as co-director of a 2011 film about the residents of St. Elizabeths Hospital. In “Voices From Within,” which Walton directed with her sister Joy Haynes, five residents use cameras to shoot their own video diaries. Walton’s signature method of building relationships with residents and making them co-creators of their stories synced with Meridian’s mission of participatory filmmaking.

Before joining Meridian, Walton says she was barely getting by, living off small arts grants and income from occasional promotional work for local companies and other projects. Luckily, her godfather bought the house she grew up in and doesn’t demand the amount in rent that Mount Pleasant apartments go for.

“My cost of living is very low,” she says. “But there were a lot of times when I was real close to zero in my bank account, and then a small grant would pull through and I would make it work.”

So, having begun shooting the D.C. Green Corps project, the studio enlisted Walton to shoot the last footage of the jobs program, whose federal funding ends Monday.

“Within a matter of days she was slapping high-fives . . . pouring herself into those relationships and really being vulnerable,’” says Brandon Kramer, a Meridian co-owner. “And it’s, like, who she is. It’s not work for her.”

‘There is already power’

At Riverside, before the guys can hold the camera and take turns playing store owner, patron and cameraman, Walton asks them to share.

“I know it’s important for me to sometimes say how I’m doing so that I can actually be present. Just a couple of words about how you’re feeling and something that you’re excited about for today,” Walton prods.

“On a scale of one to 10, I think I feel like a nine,” says McNeill, an aspiring director. “I didn’t have any coffee, but I got my workout on yesterday. Overall, I miss my daughter. I want to see her. I’m not really looking forward to the program ending. I’m looking forward to learning as much as I can from this process we’re a part of. I’m trying to learn from you.”

Samuels, 33, steps in to reassure McNeill that he’ll soon see his daughter, who lives with her mother.

Walton does not empower people or give voice to the voiceless. “There is already power there,” she says.

It’s not about her, but, really, it is. It’s about the way she makes it about them.

Walton’s passion to help people tell their stories was fueled when, as a 9-year-old, she and her little brother ran to the rooftop of their home to escape tear gas during the Mount Pleasant riots in 1991, which were sparked by a police shooting of a Salvadoran man.

“When you’re little, you have such a clear sense of right and wrong, fair and unfair. I was always aware of the divisions in my neighborhood. . . . Then, all of a sudden, Church’s Chicken was on fire, and places that I went. This is what happens . . . when people feel not heard,” she recalls thinking.

Growing up in Mount Pleasant, with ties to the arts community through her mom, local actress Sarah Pleydell, and her godmother, community activist and performer Rebecca Rice, Walton saw an opportunity to express herself through multiple art forms.

Walton’s mother asked Rice to organize an informal club for her daughter and other girls her age in Rice’s basement. “The Saturday Girls Group” became a place to make sense of the world through the arts.

“We dressed up. We enacted scenes of things that we were going through in our lives,” Walton says. “Whether it be sexual harassment on the street, teachers, being bullied, being depressed, being suicidal. There was this range of things we all go through as teenagers, and particularly in the city.’’

Years later, Walton discovered the wider audience that film gives people to tell stories. She preferred its archival nature and its portability. For her, film became the perfect instrument to get people to understand one another.

In 2001, when she returned to the District after attending film school in Scotland and London — a detour she took to explore her roots — she saw her city changing. She remembers Columbia Heights as the epicenter.

City in the throes of change

“There was tension in the air. Every corner was a construction site. Everybody looking around, like, ‘Who’s moving next?’ ” Walton remembers thinking, “Who’s documenting this?”

She learned that her friend from the local political arts group Spoken Resistance, whom she had performed with during summer breaks from college, had written a one-woman play. Anu Yadav’s “Capers” told the stories of residents of the Arthur Capper/Carrollsburg public housing complex, which the federal government planned to convert into mixed-income housing.

After meeting Capper residents Rose Oliphant and Debra Frazier, Walton and co-producer Sam Wild were eager to film the residents’ struggle to remain in their homes. The film “Chocolate City” debuted in 2008 and has become a teaching tool at universities and beyond.

But, Walton says, there’s no instant gratification for her work. “It’s not a quick fix,” she says. “It’s not like all of a sudden you hand people a microphone and they get their stories out and everything’s better. . . . Sometimes you don’t even know the effect you’re gonna have on people. Sometimes they don’t know. ’’

Oliphant, one of the few residents of the housing complex who made it into the new development, says she knows.

“If it weren’t for Ellie doing ‘Chocolate City’ and Anu doing the play, we would have never been on the map,” she says. Walton turned Oliphant’s six-year struggle to meet the government’s requirements to return to the site into a short film called “Struggling to Get Back.” By the end, Oliphant had become a community activist.

“I never had a Caucasian for a friend,” says Oliphant, who is African American. “But after I got to know her, she was just like us. So down to earth. Just a different color.”

It’s graduation day for the last cohort of trainees of the D.C. Green Corps, and they’ve filled the black folding chairs in the canary-yellow ballroom of the Josephine Butler Parks Center across from Meridian Hill Park. Graduates watch a 10-minute film of their work from the past 12 weeks. As they recognize themselves, there’s some blushing, but mostly there’s laughter. Walton gets it all on film.

Trainees wave to their fans in the crowd as they’re awarded certificates.

For Samuels, who’s seated in the last row facing east, the moment is bittersweet. He’s acquired some great skills in urban and community forestry but doesn’t have a full-time job. His paycheck ended with the program April 10, and he has a daughter to take care of.

After the ceremony, he’ll hit some spots on U Street and relax a little. The next day, he’ll sleep in, but just a little past 6 a.m. because he must continue his job hunt, perhaps in the computer room of a library. Maybe he’ll have the chance to use the interviewing skills he picked up while filming. If he’s really lucky, maybe he’ll find a business in Anacostia that hires people from the neighborhood, just like the one he found in Deanwood.

“We believe in Michael,” Walton says.

Her crew’s not packing up and going home. The program is over, but it’ll keep filming him as he tells his story of looking for work in this city.