Life as a Collage on NPR and ABC

In September, our student filmmakers from the ‘Life as a Collage’ film project were recognized on NPR-WAMU 88.5’s Kojo Nnamdi radio show and on WJLA ABC7’s ‘Harris Heroes’ for their work creating a documentary film commemorating the life of beloved Sitar art teacher Tim Gabel. 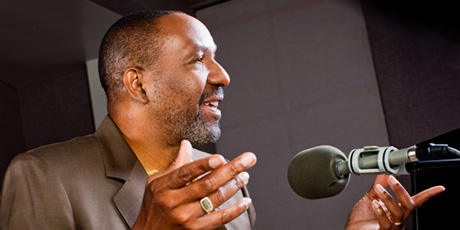 In his introduction to the show, Nnamdi said: “When it came to finding a subject for their documentary, the Sitar Arts Center students chose a topic close to home and to their hearts: an artist and longtime volunteer teacher at the center who was dying of liver cancer. The resulting film, “Life as a Collage,” is as much about the students dealing with the subject of death as the teacher himself.” 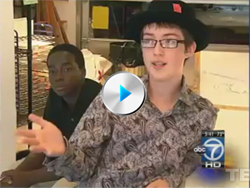 The ABC7 piece described the way the project offered a group of art students in D.C. a unique way to honor a beloved teacher as he was dying from liver cancer.  By creating a documentary during his last days in classes at the Sitar Arts Center. Sitar is located in the Adams Morgan neighborhood, providing arts education for low-income students. Tim Gabel had been teaching there for 10 years, never missing a day, until he became sick. From producing and directing to even composing the film’s original music, seven students managed every aspect of creating the documentary.

Forrest Penrod, a 16-year-old student, directed. For him, the project was about much more than shooting and editing. “I learned how to deal with death, I learned much more about emotions, who I am as a person, how I deal with death,” he said.

Their teachers, Brandon and Lance Kramer of Meridian Hill Pictures, said despite the students’ youth, they were amazed at their ability to manage the sensitive subject. The students showed “maturity, creativity, innovation, sensitivity and compassion,” Kramer said.

“The thoughtfulness that they all directed towards this project was just unbelievable,” Lance said.

“For some people who really loved Tim, they can know that Tim is still there through the film,” said student Tokunbo Adedeinde.

Through the film, the students have immortalized what became Gabel’s last art lesson: “Do your art because that’s your art and the most important thing you can do is to finish it no matter what happens.”

Listen to the segment on the Kojo Nnamdi show, originally aired Tuesday, September 20, 2011 on WAMU 88.5 radio.