On June 21st, a group of documentary filmmakers, JavaScript hackers and Non-profit organization devoted to government transparency gathered to do something unique: create 3 proof of concept web documentaries in 1.5 days.

Local filmmakers Meridian Hill Pictures, Industry veterans Elsewhere Films, Fellows in the Knight/Mozilla program, the lead developer of Zeega, a Localore participant, the Sunlight Foundation, and a veteran of the popcorn community took part in our latest Living Docs hackathon as part of the Silverdocs film festival. They each succeeded in creating a working prototype of a documentary made for the web. Below are a few testimonials, as well as their prototypes. Since these were created in such a short time frame, see the special viewing instructions in order to play them properly. 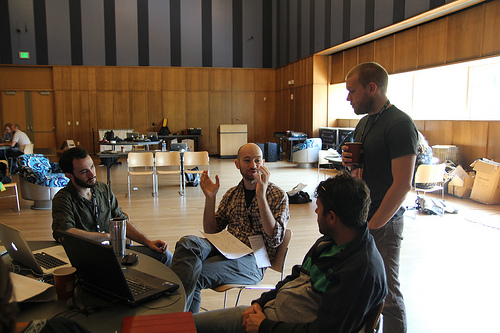 Green Corps (working title) is an intimate examination of the struggle low-income Americans have experienced in their journey to get back to work. Through a focus on people impacted by the DC Green Corps, a green job training program created by President Obama’s American Recovery & Reinvestment Act, and the Civilian Conservation Corps, created under FDR’s New Deal in the 1930s, the film explores whether public stimulus can have a long-term, sustained impact on broken lives and economies. The interwoven portrait of the people, parks, communities and histories is unique, focusing on those whose struggles and hopes are representative and iconic of the American zeitgeist in the age of recession and rebuilding. The Green Corps web-based cinema project is an experiment combining verité and participatory footage with Google maps and Google Street View data to create an interactive, transmedia platform for engaging with the story, characters and green spaces profiled in the film. By situating short video vignettes of intimate reflections from the job corps trainees within an interactive Google Map of Washington DC, the Green Corps web-based cinema project provides viewers with an opportunity to self-navigate the story and better understand the relationship between the people and the land.

What did you enjoy most?

The process of collaborating with creative technologists who approach their work from a totally different perspective than us as filmmakers was a healthy combination of a total challenge and a mind-blowing demonstration of new possibility. We loved reshaping our thinking, pushing ourselves to imagine new ways of telling stories through a technology we’re still trying to understand.

What did you learn?

We gained a dramatically-elevated appreciation for the art of coding. Listening to Cole and Mark, our creative technologist collaborators, speak in another language as they brainstormed, coded and tested, was nothing short of humbling and awesome. We admired the way web development provides an opportunity for immediate feedback (it works or it don’t!) whereas the feedback when making a long-form documentary film can often take months or years to materialize. At the end of the Hackathon, it was a real game-changing experience for us, presenting our prototype to an audience, and observing how audiences were forming an emotional connection with the concept we had roughly sketched out only days before.

What's next for the project?

We are in the final phases of production and are currently fundraising for post-production support so we can move into an edit of the film, so it can be completed and distributed in 2013. With new inspiration from the LivingDocs project, we are also seeking funding sources (like the BAVC Producer’s Institute) to further develop the web-based cinema prototype into a full platform that can complement the film. 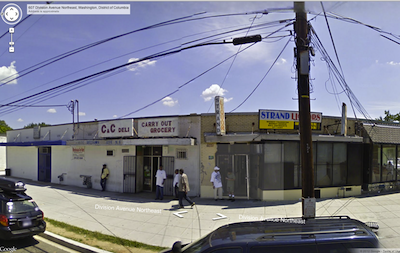 (Best viewed on a Mac in Google Chrome): http://livingdocs.github.com/greencorps/

2) Watch the introductory video, which will lead you to a short interactive audio tour and Google Map of the DC parks and communities where the Green Corps trainees live and work.”

3) Once the audio narrative completes, you’ll walk with trainee Isaiah on a participatory video segment where he gives a tour of the grocery stores and food available in DC’s Deanwood neighborhood.”

4) At the end of Isaiah’s tour, you’ll enter a Google Streetview of the same space, where you can explore Deanwood on your own terms. “

5) Click “WATCH OTHER TRAINEES” button in the right hand corner of the screen to watch more stories.”

6) On the map of Washington DC, each of the 12 pins represents a different video. The Google Streetview appears after each video completes, allowing you to self-navigate each neighborhood and green space. Click “WATCH OTHER TRAINEES” at any time to return to the map and select another video.”

Watch the rest of the Hackathon projects on The Living Docs Blog.