This month Sitar Arts Center will screen Life as a Collage, a documentary created by seven students in Sitar’s Multimedia Writing and Documentary Film classes, in partnership with Meridian Hill Pictures. Created while artist and longtime Sitar volunteer Tim Gabel was struggling with liver cancer, the film captures one teacher’s amazing dedication to his students and his art, as he reflects during the final stages of his life.

The film screening on Tuesday, September 20th at 7:00 pm is free and open to the public. Following the screening, the student filmmakers will discuss their experience creating this piece in a panel discussion with teaching artists Brandon Kramer and Lance Kramer from the Washington DC-based production company Meridian Hill Pictures. 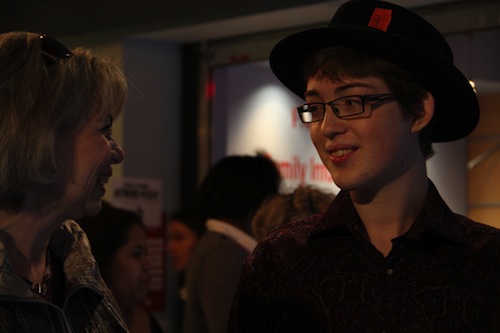 Each student, ages 10 to 18, took on a specific role in the production as director, producer, editor, camera operator, audio technician and music composer, supported by the team from Meridian Hill Pictures and writing teacher Livy Tracyzk. As a group, they chose to create a tribute to the much respected and loved art teacher Tim Gabel during his last months. From storyboarding the concept to coordinating the film shoots to editing the footage, the class learned how to create a documentary, working hands-on through each step of the process. All of the music in the film was written and composed by Sitar student Callye Christopher. Student director Forrest Penrod spoke about the film and presented selections at the American Film Institute SilverDocs panel “Making a Smaller World: Youth Voices Speak Up” and at MhZ Networks’ ShortieCon as part of “Giving Voice to People: New Access and Power in Community Video Storytelling.”

Having taught at the Center since it opened ten years ago, Gabel’s classes in Landscape Painting and Collage defined the Saturday art experience at Sitar, bringing generations of families together through art. Life as a Collage explores Gabel’s relationship to his artwork and the rich experience he had as part of the Sitar community both as a teacher but as a consummate learner, taking so much from his students. Gabel passed away in March but this film will allow a whole new generation of students to be touched by his work. 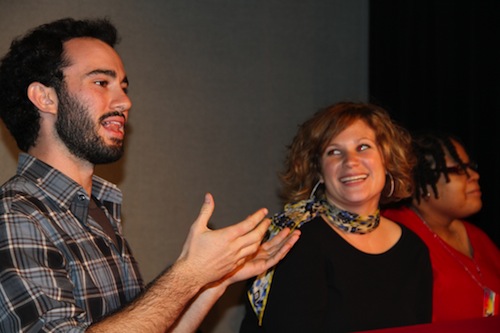 Sitar Arts Center provides multidisciplinary arts education to the children and youth of Washington, DC in a nurturing, creative community where young people discover their inherent talents and gifts.  Fostering personal and artistic growth through the visual arts, music, drama, dance, digital arts and creative writing, the Center offers after-school, weekend and summer classes to more than 700 students a year, 80 percent of whom come from low-income households. More than 120 talented artists volunteer their time each week to teach and inspire the Center’s students in a state-of-the-art facility. Together with a network of premier partnering arts organizations such as Shakespeare Theatre, Corcoran Gallery of Art, the Washington Ballet, the National Symphony Orchestra, Washington Performing Arts Society and CityDance Ensemble, our passionate volunteer faculty makes a lasting impact on our students’ lives.

In 2009, First Lady Michelle Obama presented Sitar Arts Center with the National Arts and Humanities Youth Program Award (formerly known as the Coming Up Taller Award), distinguishing Sitar as one of the premier afterschool arts and humanities organizations serving youth in the country. Bringing high-quality arts education to families who would otherwise not have these opportunities, Sitar Arts Center relies on charitable contributions to ensure that no family is ever turned away because of inability to pay. To register for classes, volunteer or learn more about the Center, please call 202-797-2145 or visit http://www.sitarartscenter.org

MHP is excited to announce the launch of our 2013 Youth Documentary Program in partnership with Sitar Arts Center, funded in part through a generous grant from the National Endowment for the Arts.
Continue reading >