Thoughts from a Teaching Artist 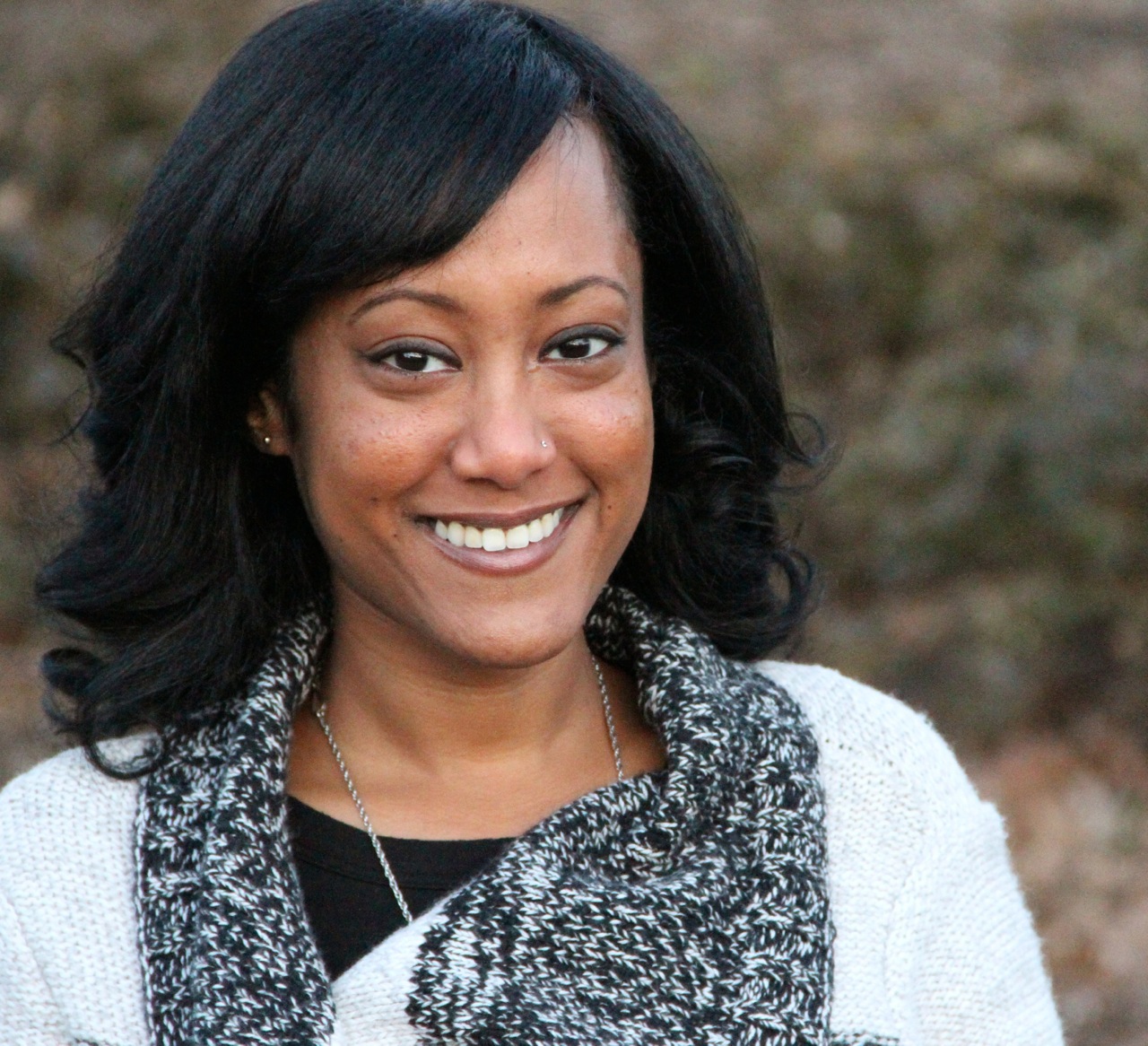 You're a storyteller - which I am.

And you’ve just been hired as the lead Media Teaching Artist at Meridian Hill Pictures.

The position is for a pilot after-school program. The class name is long, but unassuming: Community Video Storytelling.

Really, it’s a transmedia class in plain disguise. As Media Teaching Artist, your lofty mission is to partner with the Sitar Arts Center in the nearby Adams Morgan neighborhood, and introduce their students to the wonderfully murky world of nonlinear storytelling.

You have a couple months and a handful of students. Just two hours each week must somehow add up to a completed production. In the end, you’re expected to create something that lives in two places and has multiple faces: a final project that combines documentary video with map-based storytelling.

You accept this mission with open and eager arms. You study old curriculums and craft new lesson plans. Then you start the semester and all your pretty planning flies straight out the window.

Describing this past spring as a whirlwind would be an understatement, but it was also nothing short of amazing.

I watched students between the ages of 8-18 express themselves and engage with their city. Once the initial icebreakers and awkward questions were out of the way (What the heck is transmedia, anyway?), we set off on the business of story development.

Students quickly learned that transmedia could be thought of as an interactive approach to an open-ended question, and it was my job to help them arrive at the right ones. I gave them a few stipulations: the question had to be personal, and it would eventually be incorporated into a map.

On their own, they arrived at this: How does neighborhood change impact different people?

Together, we produced a distinctive map of the neighborhoods around Sitar. The final project is not just a map, but also an interactive experience. Here’s how it looks: 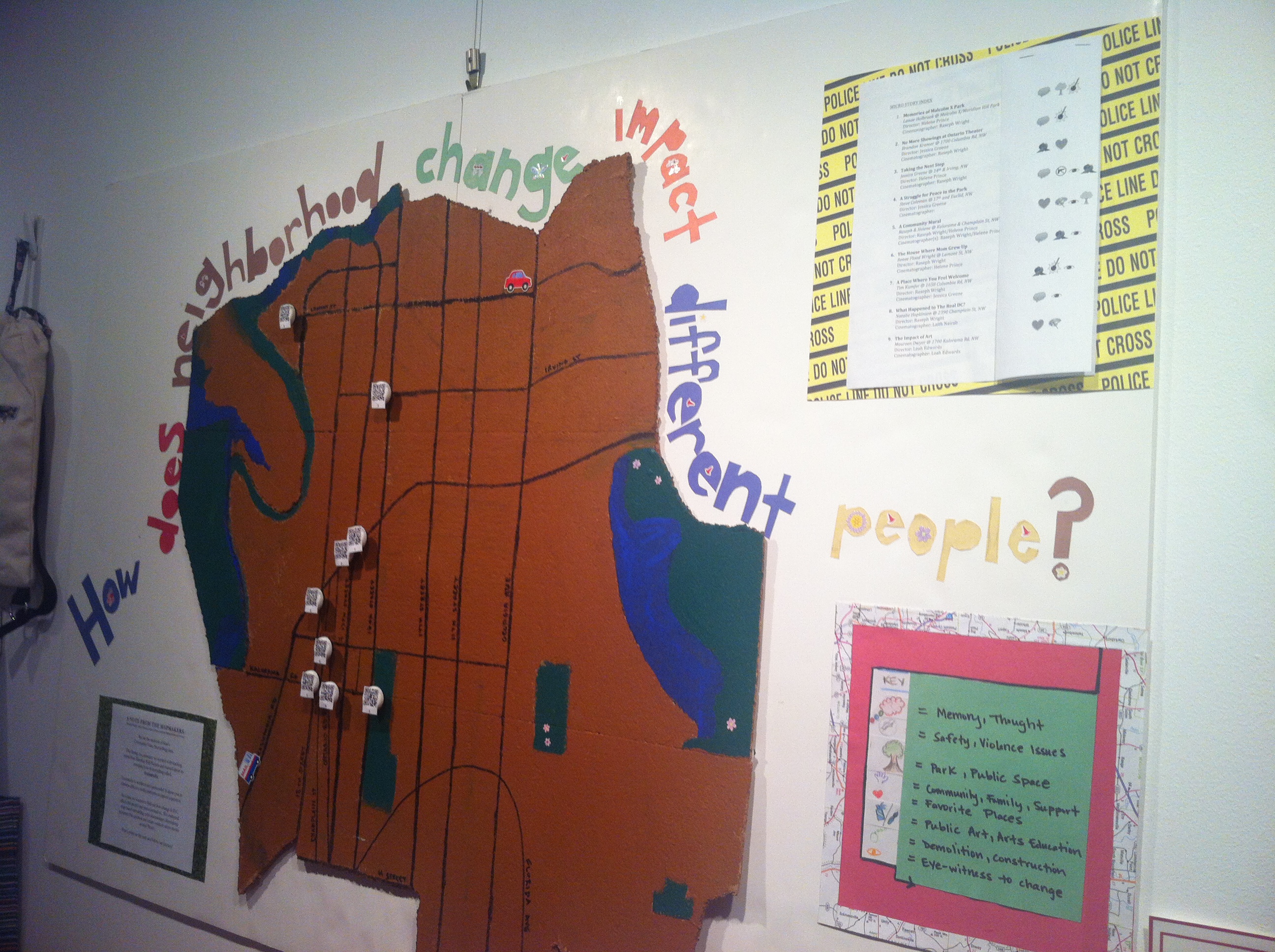 The cluster of digital video stories pinned to that map is a testament to the students’ work this semester. Using iPads and accessible mobile technology, they learned how to interview local changemakers -- family members, business owners, neighbors, friends, and even each other.

As they navigated the city’s Ward 1 community and documented impactful people and places, each student had a chance to rotate their role in the film crew, serving as either director or cinematographer.

It was a process of purposeful fun. I, along with my co-instructor Sara Fusco, witnessed the students “step up to the plate and finish every bite,” as project manager Raseph, 12, put it.

The interview he conducted with his mother on the steps of her mother’s Mt. Pleasant home was a pivotal moment in production that illustrated how personal the storytelling process can be.

What was it like growing up here?, Raseph asked his mom. How has it changed you, [and changed] for you?

The House Where Mom Grew Up from Meridian Hill Pictures on Vimeo.

He and his classmates had an opportunity to explore the narratives closest to them, without any distracting bells and whistles. That meant no special effects, no digital zooms, and no filters. Just “Camera, ready?” and “Go.”

Once the interviews were filmed, we began post-production. The students learned how to edit with a careful eye and a vigilant ear, focusing on content and quality. They identified key themes related to the topic of neighborhood change, from safety issues to public art, and came up with story titles like “A Struggle for Peace in the Park” and “A Community Mural.”

All the micro stories they created are available online, but the map display is home base (find out where to see the physical map here). Made of cork and poster board, the 3 x 4’ display is a sight to see. It provides a legend, index, project description, and most importantly, the primary, tactile interface for engagement.

That’s where the transmedia comes in.

Each QR code can be scanned with a QR reader app on your smartphone or tablet, and you can start your journey at any point on the map. Because of this, students like to describe the project as a “Choose Your Own Adventure” story. And really, that’s not too far from the mark.

The whole semester felt like one, big adventure. Why not give others the chance to join in?

On May 13th, when our project debuted at Sitar, attendees at the annual Showcase Week reception were invited to view the map, borrow iPads, and watch the micro stories in any order they liked. They were also encouraged to collaborate with us. In keeping with true transmedia fashion, we kept the project open and participatory.  We asked people to record micro stories about other Ward 1 locations and add their own pins to the map.

What resulted was this: 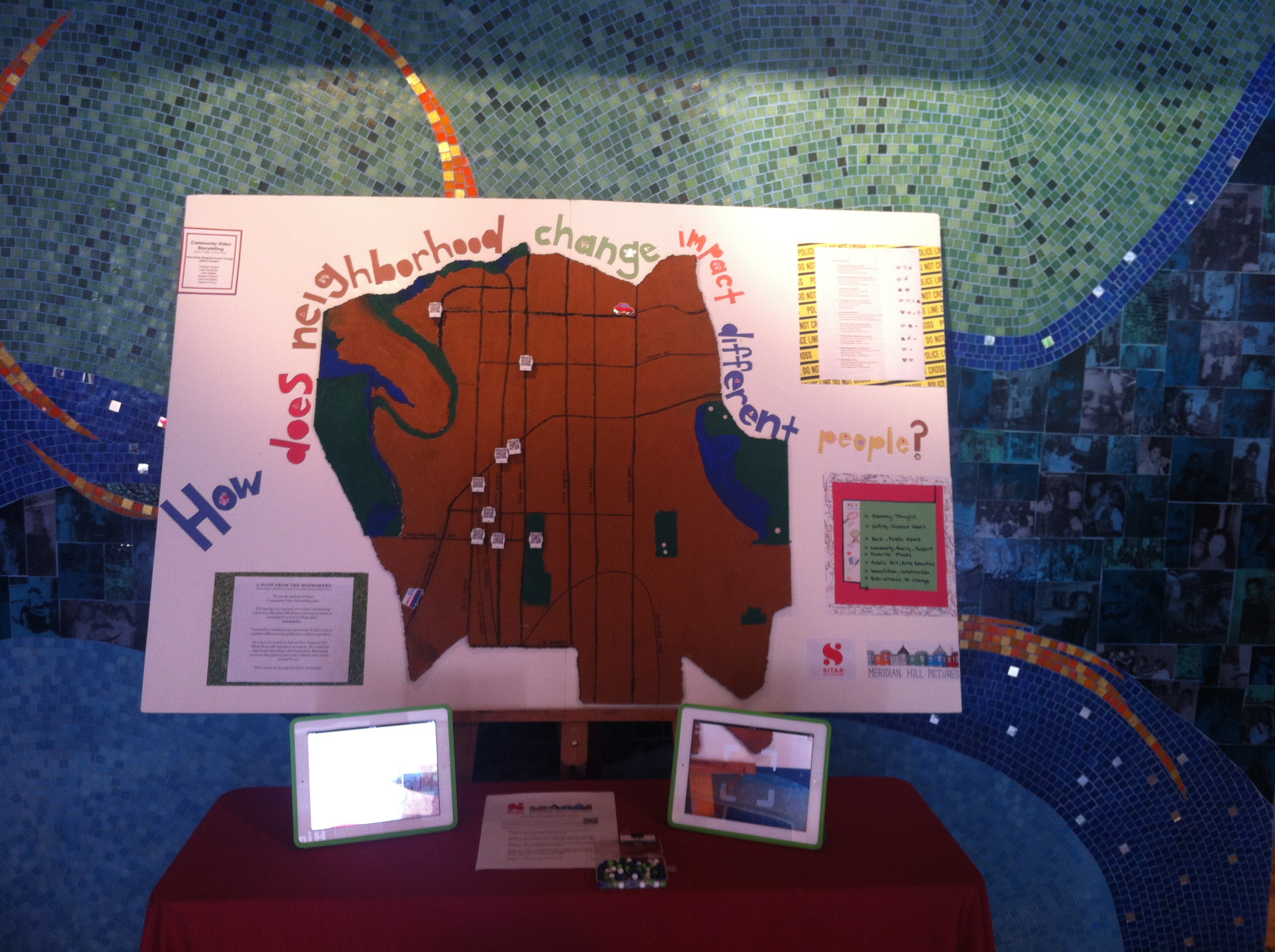 A dynamic and inclusive community story with plenty of room to grow.

Now that the reception has ended and the class is over, I’m floored by what my students and MHP accomplished together. Our map-based story isn’t just an outstanding example of transmedia, it’s proof of what can come from a big dream, a little ingenuity, and a lot of hard work.

Where to find the physical map:

June-July 2014: The map was on display at ArtReach Community Gallery 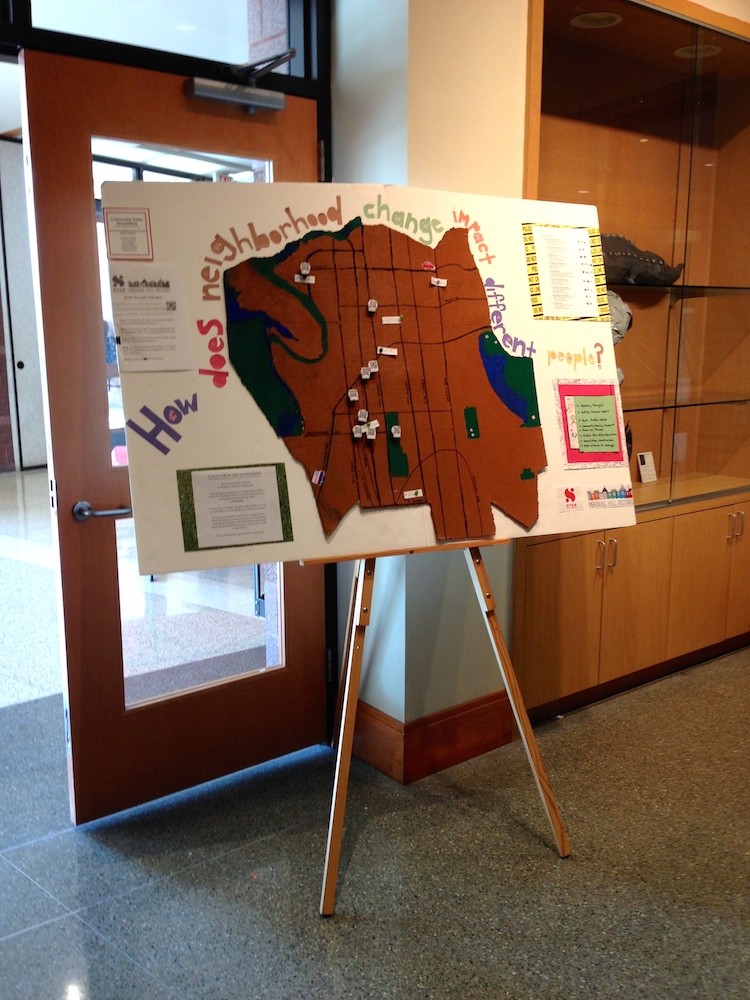 August 2014 - present: The map currently lives at our studio. Know somewhere it should be displayed?

Email us at [email protected]