Meridian Hill Pictures is excited to have two current projects featured in the conference portion of the annual Silverdocs Festival. Now in its 10th year, Silverdocs is the product of a partnership between the American Film Institute and the Discovery Channel, showcasing international documentary films and fostering public dialogue through a concurrent conference. Specifically, on June 20 and 21, Meridian Hill Pictures will participate in the Hackathon, an intensive two-day event sponsored by the Living Docs Project, in which filmmakers are paired with Mozilla web developers to produce a web documentary prototype. And on Saturday, June 23, Meridian Hill Pictures' students from the Arts & Technology Academy will participate in a youth media panel as part of the concurrent Schooldocs conference. 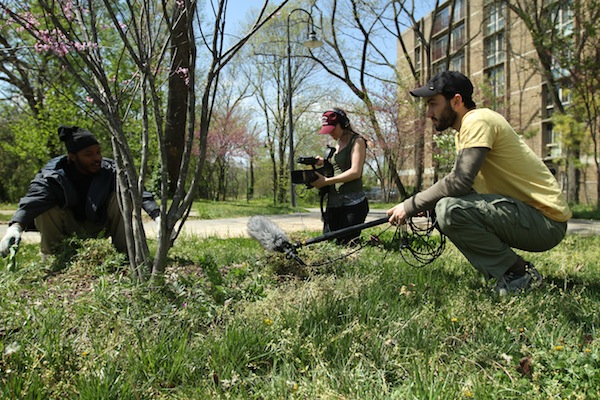 During the Hackathon workshop, Meridian Hill Pictures will have two days to partner with Mozilla web developers to create a web-based prototype of our Green Corps (working title) film. The Hackathon is an experimental project, previously held at select festivals including Toronto's Hot Docs. Past films workshopped in Living Docs Hackathons include Land Of Opportunity, The Interrupters, and The Tillman Story. The Hackathon at Silverdocs will also include the challenge of incorporating a public dataset into the prototype. At the conclusion of the two days, Mozilla will host a closing panel discussion with all four participating teams, providing a behind-the-scenes look at the process of creating web documentaries. The closing Hackathon Panel will take place on June 21-22 from 3 to 5 pm in the Silver Spring Civic Building, Ellsworth Room (1 Veterans Place, Silver Spring, MD 20910). For more information about the project, check out the Living Docs website. Living Docs is sponsored by the Mozilla Foundation, ITVS, Tribeca Film Institute, Bay Area Video Coalition, and the American University Center for Social Media.

Meridian Hill Pictures will also participate in the youth media panel “Making A Smaller World: Youth Voices Speak Up” as part of the Schooldocs program, represented by Anis Hassan, a fourth grader at the Arts and Technology Academy (ATA) in Northeast Washington, DC. During the 2011-2012 school year, fourth and fifth graders from ATA worked with Meridian Hill Pictures, in collaboration the John F. Kennedy Center for Performing Arts, to produce the short documentary Operatunities. The film shows how opera as an art form has inspired and touched the lives of local students. In the Schooldocs panel, young filmmakers from around the world will screen their projects and discuss how filmmaking has impacted their lives and communities. Additionally, professional filmmakers will host a master class in media production following the panel. The panel will be held on Saturday, June 23 from 9:30 am to 12 pm in the Silver Spring Civic Building, Great Hall 1. For the full festival schedule, visit the Silverdocs website.